So you might remember a couple of blogs back I mentioned that a friend of mine didn’t feel like ‘her’ on her wedding day, and we were planning a photo shoot to get her some photos that she liked….well, we did it! And, can I say, it’s the BEST way to spend a Friday night!!

She has done her best to get rid of all of the photos from her wedding day but a few still lurk within social media – however as she’s my friend and I love her I’m not going to put them on here. BUT I am going to show you the new ones!

Here’s how the day panned out.

Claire arrived around 3.30pm (after shouting at the SatNav for taking her on the Big Roads – she much prefers a little country lane!) armed with a bottle of fizzy, and we had a lovely catch up. In comes the dress and out goes Mr Wedmother to collect mushrooms for the curry for tea, and pudding!

After getting the rest of the instant tan sorted, her hair done and make-up refreshed and getting her into her dress (I forgot how much fun it is to pull those ties nice and tight) we spent about half an hour deciding whether or not she should wear her veil. The dress, a lovely taffeta number, we pretty plain in the bling department but ruched at the bottom. The veil was blingy with little crystal droplets. BUT she is definitely NOT a veil girl. We decided this was one of the problems with the first attempt (aka the wedding day).

What the dress did have was some detachable do-dits that also could go in your hair, and that was much more Claire-like!

Back comes Mr Wedmother, out comes the camera and out we trot to the newly mowed and trimmed garden (not on purpose, just luck it had been done!).

Claire’s issues – her chin(s) and her (these are her words) fat arms. So we tried several painful poses that disguised these most disliked of features, and here’s what we got. 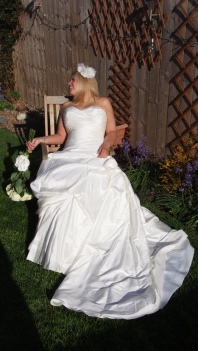 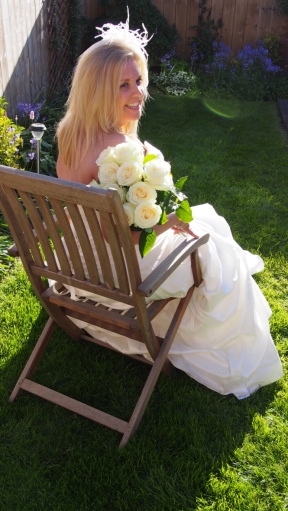 Where she’s wearing a wrap, that is from my dress (and that’s the next part of the story…) but we thought we’d try it to see if it helped without looking daft. We think it helped!

Now, I’m not one to pass up the chance to get dressed up and since my wrap was out anyway….. I popped her veil on since it was steamed and mine was still in it’s box. What you can’t see is that I’m in flip flops and she’s in pink tipped socks….

I’m telling you, everyone should bung on their wedding dress and prance around the garden, it’s good for the soul!

I think Claire was happy with the end results – she seemed to be enjoying herself at least! And now she has some photo’s that look like her that she’s happy to print. And what of her hubby – well he was little jealous he wasn’t there but he was in the mess enjoying time with the lads so he had a good Friday night too! 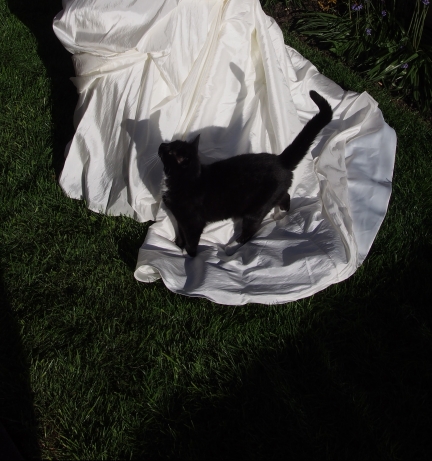 Oh, and not to be left out, the cat got involved too!

And so how did we end our Best Friday Night EVER? 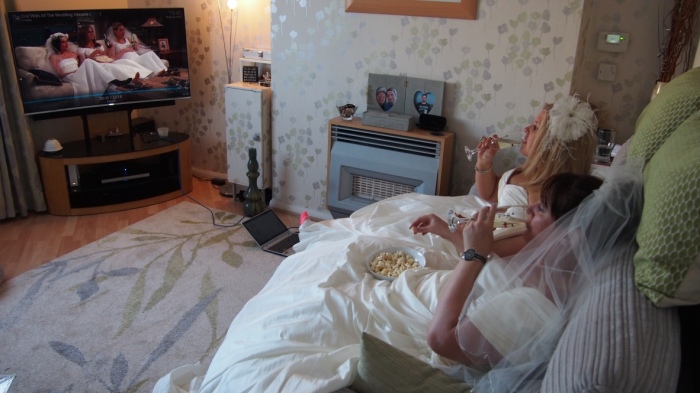 Turns out it was just over 19 years since this episode of Friends (the one with all the wedding dresses) first aired. We were clearly channelling Monica, Pheobe and Rachel. I don’t know who is who!

I can’t thank Mr Wedmother enough for dealing with the squeals of hysteria as we got into our dresses, for serving the fizzy and for taking all the photos – he’s a proper gent and a bit of a superstar ♥